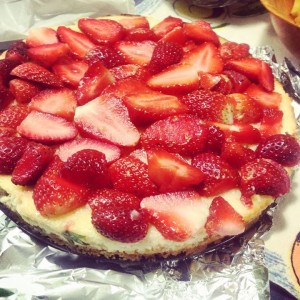 Cheesecake is a popular dessert all around the world. While many assume that it has its origins in New York, it actually dates back much further. Let’s go back over 4,000 years to ancient Greece!

Greeks are said to have served cheesecake to the athletes at the first Olympic games. The Romans soon caught on and spread the divine taste of cheesecake throughout Europe. From there it was only a matter of time before European immigrants brought their cherished cheesecake recipes to America. 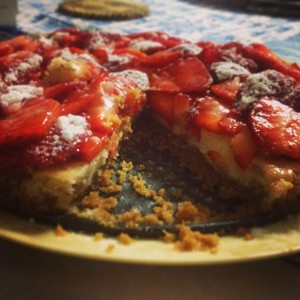 It seems that every region of the globe has embraced cheesecake in one form or another, adapting the recipe to local tastes and adding local flavors. In America, cheesecakes are typically made with a cream cheese base, but even here we vary the recipe by region. New York cheesecake is famous for its ultra-smooth texture and decadently rich flavor– achieved by adding extra egg yolks and a hint of lemon – and you’ll find other regional variations from Chicago-style to Pennsylvania Dutch. Many American bakers add sour cream for a creamy cheesecake that can be frozen without compromising taste or texture.

Italian cheesecakes generally use ricotta cheese, which makes them drier than their American cousins. The French prefer Neufchatel cheese and often add gelatin for a light and airy consistency. The Greeks might use ricotta, mizithra,farmers, feta, Swiss, or a combination of cheeses, while the Germans typically rely on cottage cheese or quark. The Japanese incorporate cornstarch and whipped egg whites into their cheesecakes for a more custard-like effect, and I’ve even heard you can find cheesecake in vending machines in Japan.

I’ve tried about 7 cheesecake recipes and it has taken a long long time to perfect it.

Let’s tackle this step by step.

Step 1 : DO NOT get intimidated. Baking a cheesecake is not as difficult as you think! The list of ingredients is long, however, you have to keep your cool.

Step 2 : Read the recipe several times before you go on to try this great feat.

Any cookie of your choice, and just about enough butter.

Crush about 10-12 cookies [ enough to line the base of  9inch cheesecake pan – A springfoam tin – A tin which comes with a detachable bottom] in a food processor and add melted butter to it, just so that it forms a nice buttery paste.

Line the base of your tin with this paste. If you want you can add cocoa powder and sugar to it to make it a chocolate crust.

Step 4 : The filling. Before making this, preheat your oven to 175 Degree C. Below are all the ingredients you need :

Combine the cream cheese, sugar, cornstarch, and salt in the bowl of a stand mixer fitted with a paddle attachment (or use a handheld mixer). Mix on medium-low speed until the mixture is creamy, like thick frosting, and no lumps of cream cheese remain. Scrape down the beater and the sides of the bowl with a spatula.

Add the sour cream, lemon juice, and vanilla to the bowl and beat on medium-low speed until combined and creamy. Scrape down the beater and sides of the bowl with a spatula.

With the mixer on medium-low speed, beat in the eggs and the yolk one at a time. Wait until the previous egg is just barely mixed into the batter before adding the next one. At first, the mixture will look clumpy and broken, but it will come together as the eggs are worked in.

Srape down the beater and sides of the bowl with a spatula. Stir the whole batter a few times by hand, being sure to scrape the bottom of the bowl, to make sure everything is incorporated. The finished batter should be thick, creamy, and silky. Don’t worry if you see a few specks of un-mixed cream cheese here and there; they will melt into the batter during baking and won’t affect the finished cheesecake.

Pour the batter over the crust and spread it into an even layer against the sides of the pan.

Step 4 : Wrap the baking tin in foil and fill a baking TRAY half way with water. Place the tin on the tray. This is called a water bath. Cooking a cheesecake in water bath helps to give it that smooth velvety to die for texture.

Step 6 : Let it cool and then refrigerate for an hour before taking it out of the tin.

Step 7 : Serve it plain or top with topping of your choice! My favorite are fresh strawberries and a blueberry compote! 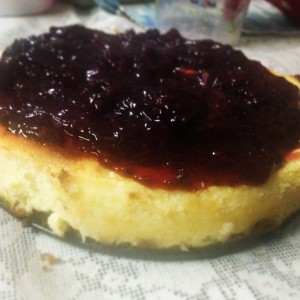