I’m a steak lovin’ girl. Steak has always been my first choice on a menu, and there have been times when the waiter has told me “Sorry ma’am, tenderloin in not available today” and I’ve walked out of the restaurant. Steak is my absolute favorite, and no amount of it can ever make me full. Some of my friends will vouch for that, since they’ve seen me eat one steak after another after another and it wasn’t even a dare.

Steak is something I discovered in Calcutta. During my 18 years in Delhi, I was unaware of what I was missing. Of course, I would salivate everytime I would watch those American food programs on TLC and would crib about the lack of choice in my country, but that was about all the exposure I had to steak. All of that changed when I moved to Calcutta. One of my first proper meals here was a beef steak in one of the most famous places for it, and I was in love. Ever since then, every restaurant I go to, I will hope that there is a steak on the menu.

“Steak, which derives its name for the Old Norse word for roast, “steik,” when served the proper, American way comes with a starch, usually a baked potato, and some vegetables, usually slathered in butter, like a corn-on-the-cob.” [ Source : Internet]

This Republic Day, my family decided to have a massive steak lunch! My grandfather had got raw steak-cut beef meat [ Sorry, I can’t be clearer about the cut of meat because I asked him what the cut was, and he said “I don’t know, I just told the butcher I want to make some steak!”]

I was fascinated and couldn’t believe that we were actually going to be making steak! The idea of steak to me somehow always came with charcoal and a barbeque grill, and my house had neither of those things. I was in awe and little did I know that my life was going to change.

We marinated the meat for about an hour and it was SO easy to cook, it’s almost unbelievable how something that tastes so good is so hassle free! Today, I’m going to share the recipe with you, so you never have to shell out a thousand bucks at a fancy restaurant when you’re craving some steak, you can just make your own.

We used a lot of soya sauce as the base. I’m unable to give you measurements because we didn’t use any. We just did whatever felt right and prayed and hoped it would be okay.

So yes, the soya sauce. You need a lot of it. We used about half a cup of soya sauce for 15 something pieces of steak. Now to that, you add a pinch of vinegar [ We used white, but if you’re feeling adventurous, you can use apple cider vinegar and even balsamic vinegar!], honey, some herbs like basil, oregeno etc… and crushed pepper corns, and salt to season of course.

We generously basted each steak piece with this marinade and let it sit for an hour and half at room temperature.

After waiting and waiting, it was finally time to get to grilling! All we needed was a non-stick frying pan, some butter, some herbs and some olive oil [ for that added flavor, and to prevent the butter from burning]

Important to remember : NEVER add butter to a pan, without any oil. Butter burns easy. Add a little oil to the pan before turning the heat on and this will prevent the butter from burning.

I followed Marco Pierre White’s technique for grilling steak and turns out, the man is a fucking genius. He’s been one of my favorite chefs ever since I first watched him on TV and after this, my respect for him grew to infinite amounts.

He says – “When the griddle pan is really hot place the steak in. For a 300g steak, it should take about one to two minutes. Turn the steak to create a crisscross on the meat and leave it for another minute or until the meat has a cooked look half way up its side. Turn the meat and when bubbles of juice start to pierce the cooked crust, take it off the heat. Leave it in a warm place to rest, uncovered.” [ Source : Internet]

And it was done!

My mom had forgotten to make mashed potatoes and there wasn’t enough time, so we made do with french fries instead. I know it’s a little not traditional, but hey who doesn’t love fries?

We sauteed some veggies in butter and garlic [ Par boil them first and then sautee it, always!] and plated it nicely and the dish was amazing. EVEN WITHOUT GRAVY! The steak was sooo juicy and it was cooked to a perfect medium rare [ How do i know? Well, after lots of tv watching I know that when a piece is brown on the edges and pink in the center, it’s medium rare, similarly, medium will be more of pink and less of brown, rare will be all pink, and well done will be all brown] and although I’d always been used to eating steak with a nice southern gravy, I didn’t miss it. 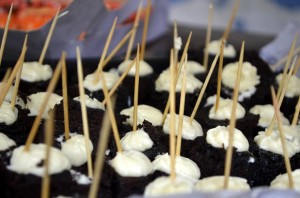 I’ve blogged through most of my school life and it is one thing I’ve enjoyed the most. After college, and ever since H&S started, I’ve barely had the time to blog! I figured it was time to change that, and hence I deliberately included a “blog” section on the H&S website.

What you will find here over time : Recipes, reviews of food I’ve eaten, pictures of food – LOTS AND LOTS of food, food experiment stories, kitchen hacks and the likes!

It’s going to be fun starting out from scratch again and I hope I have your support!